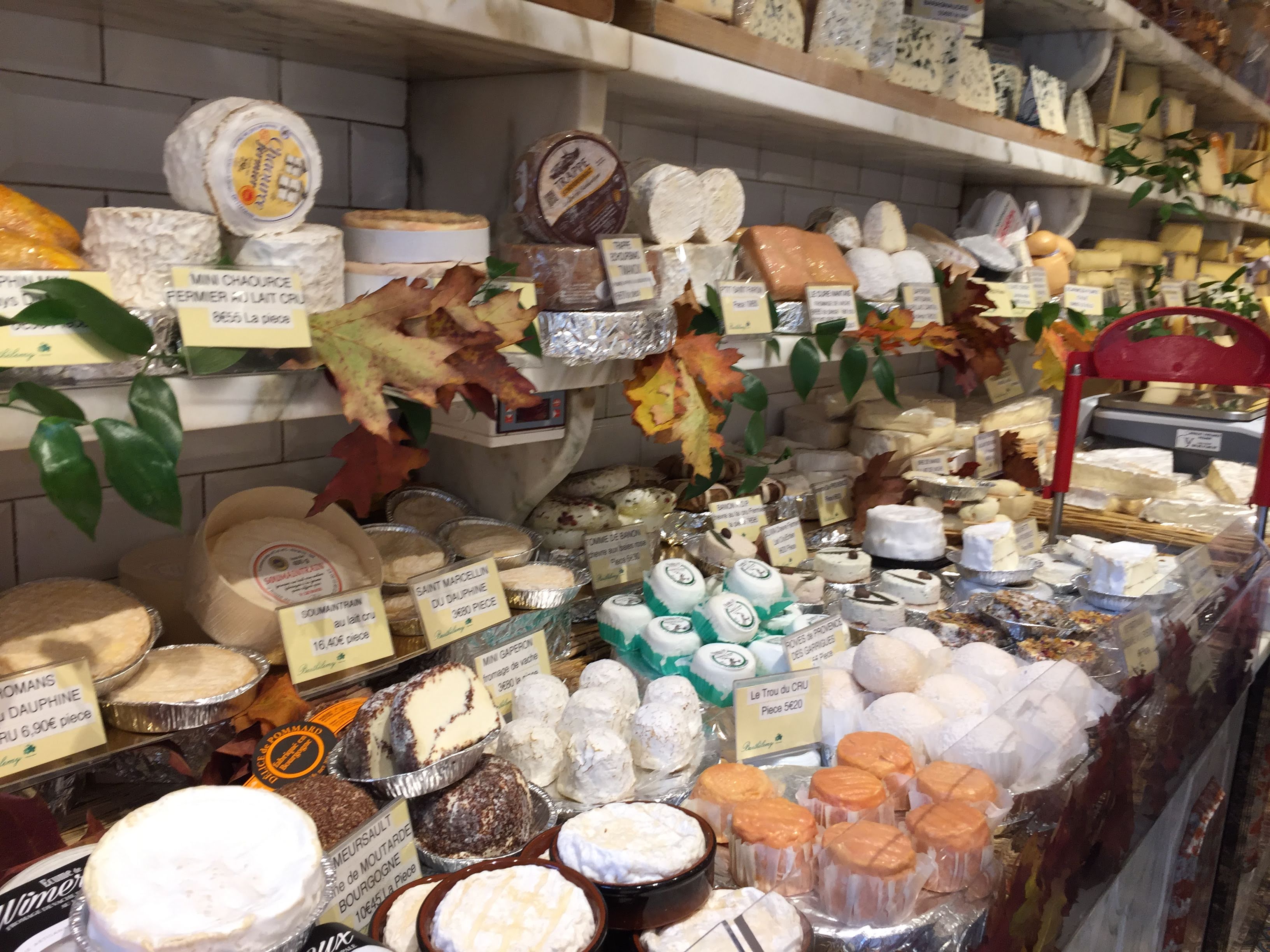 We found a magnificent cheese store. The smell of pungent cheeses overwhelmed us the moment we walked through the door. I can’t imagine working there all day long in such a confined space, but the cheeses were wonderful, particularly the St. Felicien which is a soft, round, velvety cheese somewhat like a Brie or Camembert but much more delicate in flavor. It’s now my favorite cheese and unfortunately, we cannot get it in the States.

One night we had dinner at a Vietnamese restaurant around the corner from Claude’s cousin’s office on Rue Cambon. . . Au Coin des Gourmets – Indochine. It was excellent. We started with champagne with delicious food to follow. 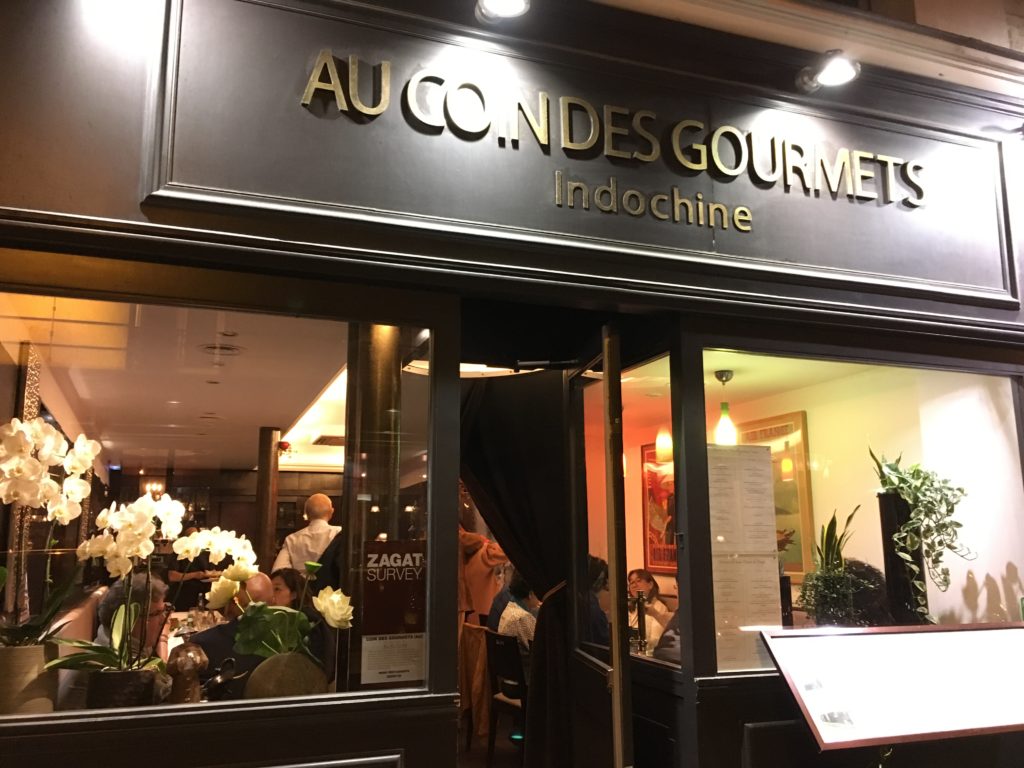 The following day we had lunch on the terrace of Jeu de Paume. It was a quiet, uncrowded, lovely, sunny afternoon. Again, we had an Asian lunch with rice and marinated chicken and eggplant.

We spent an afternoon at Bois de Vincennes. It’s a beautiful park with the Chateau de Vincennes in the distance. There was a gorgeous dahlia garden, bonsai displays and a curious mushroom exhibit with hundreds of toxic and deadly mushrooms laid out on display tables.

My thought was that anyone who wanted to commit a crime like murdering an unsuspecting spouse could easily have swiped one from the table and no one would have been wiser. It seemed like an accident waiting to happen. There were also wonderful play areas for children with high wire walks through the trees and jungle gyms made out of cord. They would never pass a safety test in the US although I noticed all the kids on the high wires and dangling steps were wearing harnesses and were hooked on to the line.

We’ve taken the Metro frequently on this trip. The Metro stop we used was at Saint Paul, about a five minute walk from the apartment on Quai de Bethune. 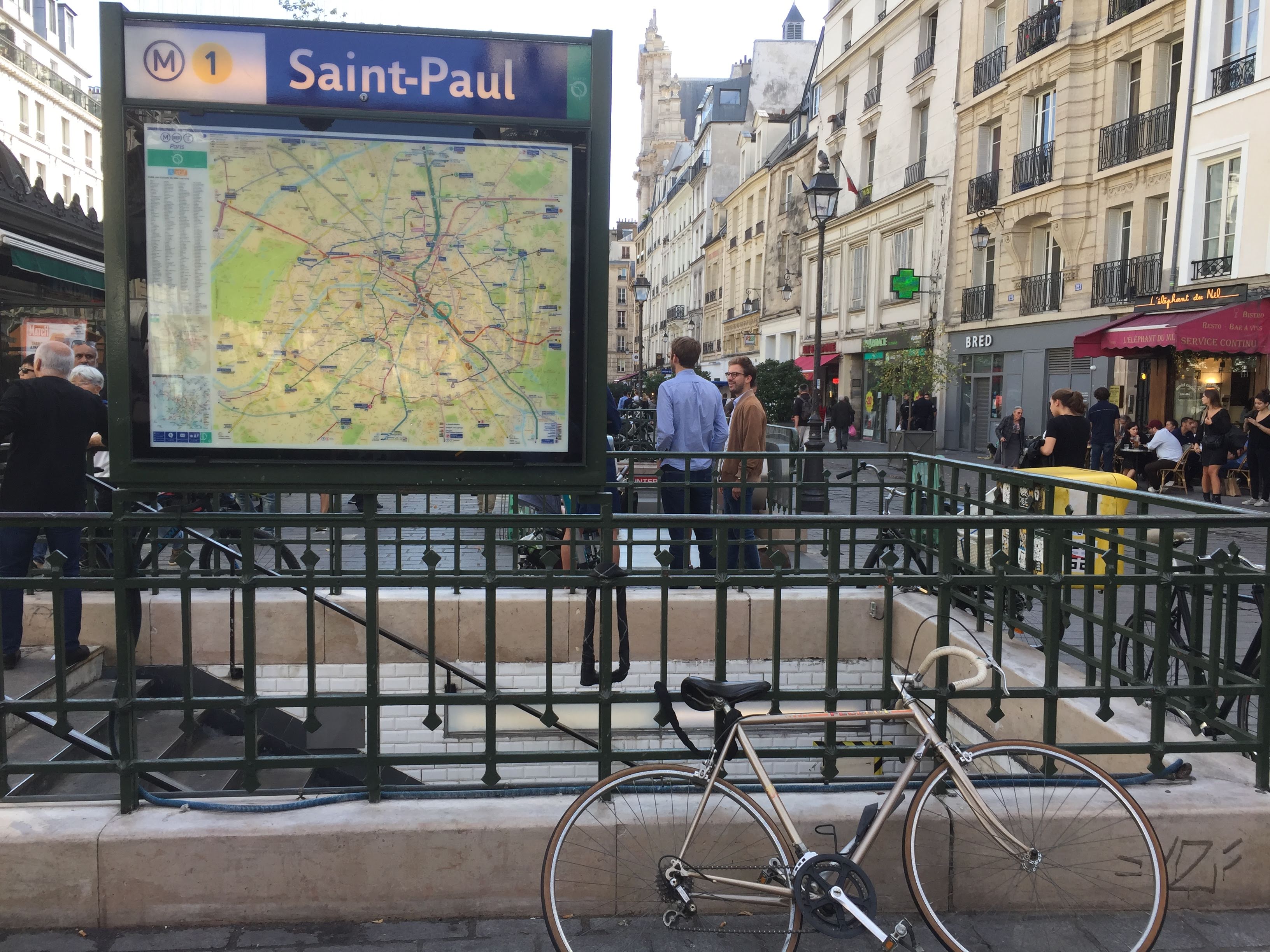 We went to the Miro exhibit at the Grand Palais. Since we didn’t have reserved tickets (something to remember for future events) we waited outside in line for almost an hour. It was the largest collection of Miro paintings and sculptures I had ever seen in one location.

In the evening we returned to the Auberge de Notre Dame for another meal. The weather was so mild that we sat outside again. This time I had fish soup and salad. Claude had a salad topped with sauteed chicken livers which he said was particularly good and a crème brulee for dessert. After having a quiche for lunch that made me queasy I opted for a soup and a simple salad. 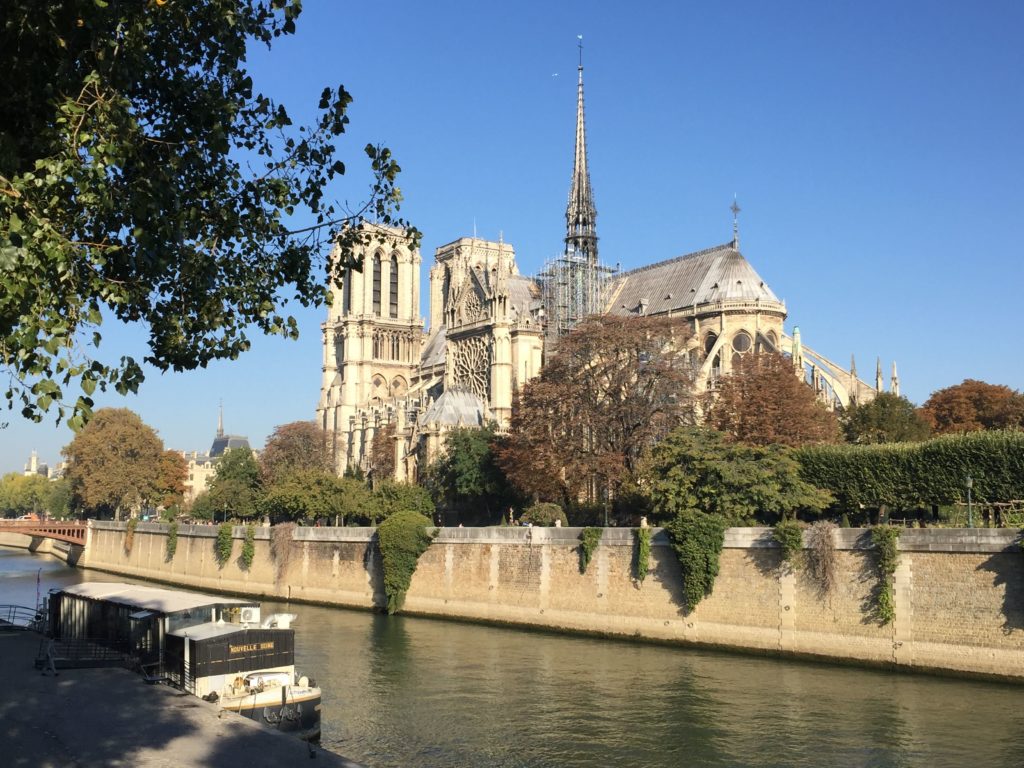 The following day we walked through Ile de la Cite past Notre Dame and the hoards of tourists to a neighborhood known as the Ancien Cloitre Quartier which had narrow, Medieval streets once traversed by monks. We walked down Rue des Ursins, Rue Chanoinesse and Rue de la Colombe and found one of the oldest restaurants in Paris dating back to 1512. The streets were devoid of tourists. After living in Paris and countless return trips, I had never ventured into this neighborhood. It was a most enjoyable discovery. 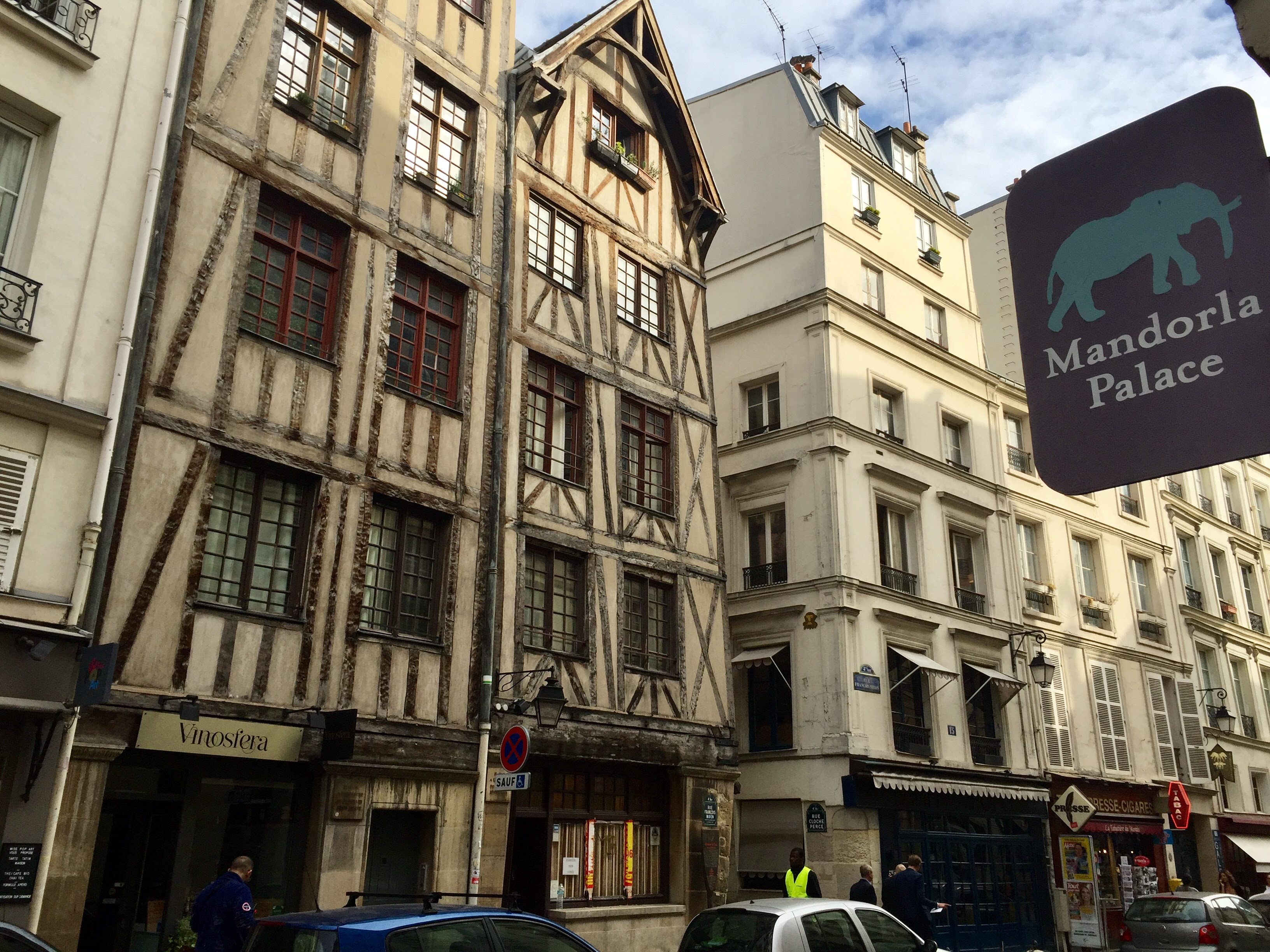 Another leisurely walk through the Marais took us over to the Place des Vosges, possibly the most exquisite square in all of Paris built in the 17th century by King Henri IV. 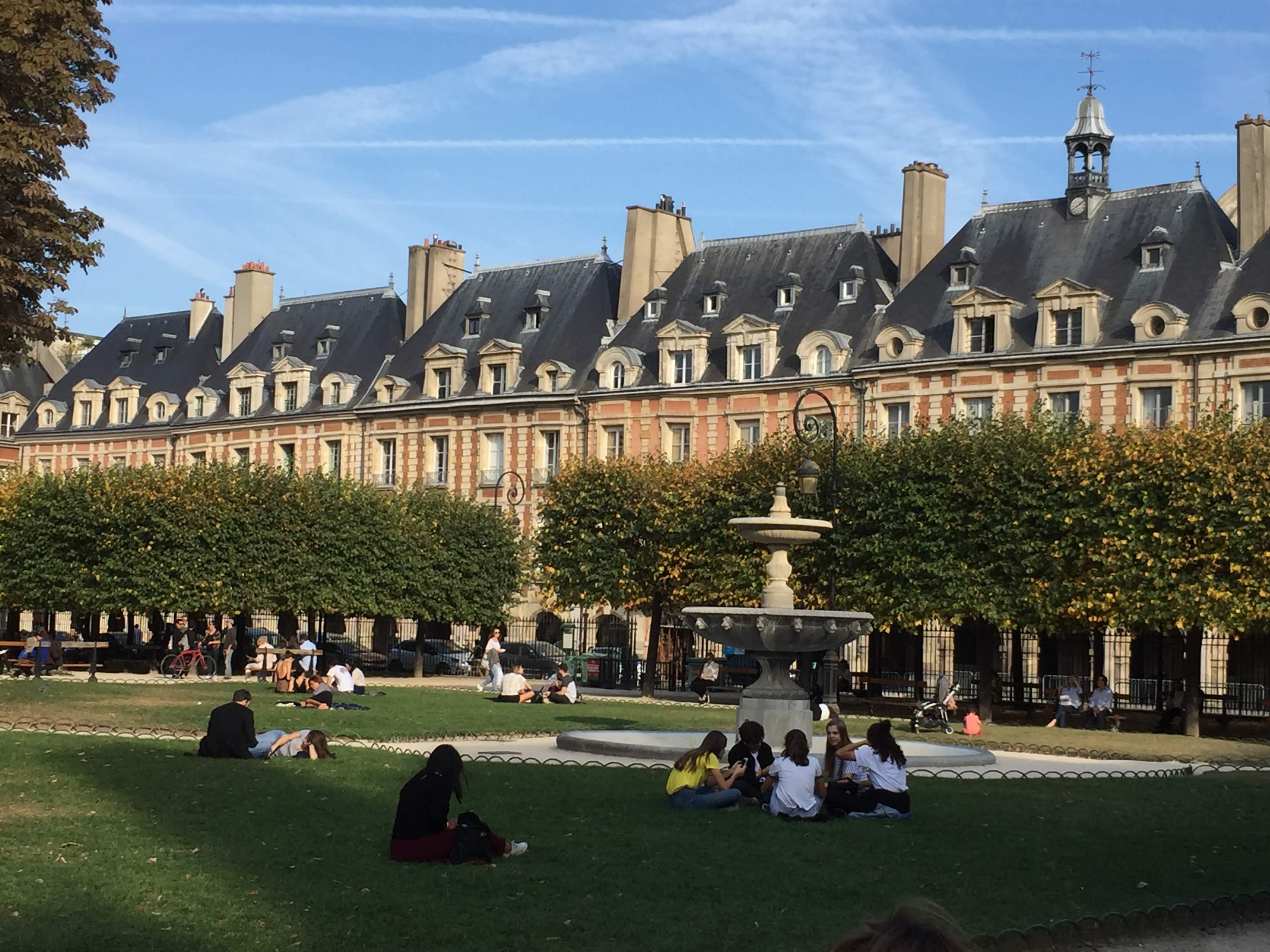 Cardinal Richelieu and Victor Hugo were two of the celebrated figures who lived there in one of the brick townhouses surrounding the square. The arcades are now filled with boutiques, cafes and restaurants. At the end of the arcade is the entrance to the National Office for Historical Monuments. It is easy to miss. The Hotel de Bethune-Sully mansion  was once owned by Maximilien de Bethune. The beautiful garden is a quiet reprieve from the hustle and bustle of the Place des Vosges.

Every time we visit the Marais, we discover new streets we’ve never walked down before. We sat down in the Parc Royal watching workmen eat their lunches and students spending a Thursday afternoon after early release from school. We then walked down rue Elzevir past the Musee Cognacq-Jay and peeked into the garden courtyard.

We decided to enjoy the sunny stroll instead of going into the museum to see the collection of 18th and 19th century art and furniture amassed by Ernest Cognacq and his wife, Marie-Louise Jay, the founders of the Samartaine department store.

A walk through the Jewish quarter and Rue des Rosiers is a must lined with specialty shops, bakeries and falafel eateries.

We briefly sat in the garden of the Gothic Hotel de Sens along the way which houses a library of historical posters and other paraphernalia. It was home to archbishops in the 16th century. We were pleasantly surprised to see a procession of the Garde Republicaine, the honorary horse guard on our way to our apartment. 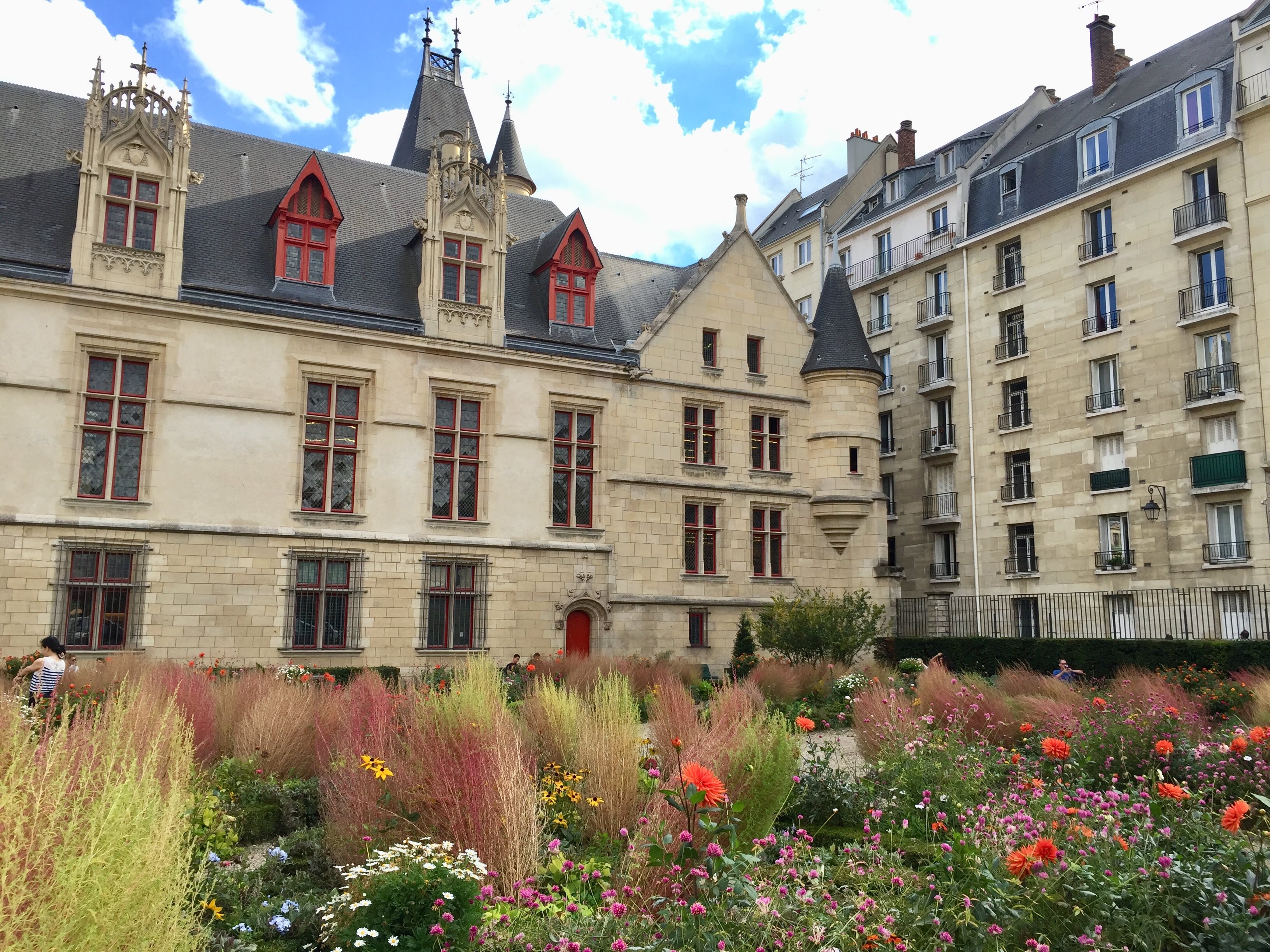 For dinner we hunted for pret-a-porter (ready to eat) places in the Saint Paul neighborhood and decided on Asian food. The spicy shrimp, pork, green beens and fried rice dinner was a reasonable 30 Euros.

Visiting Paris was not complete without a night cruise on the Seine. We walked to the Ile de la Cite to take the 14 Euro one-hour cruise with Vedette du Pont Neuf. It goes as far as the Eiffel Tower for a spectacular view of the lighted tower from the water and then returns going around the Ile Saint Louis and the Ile de la Cite.

We passed the Louvre, the d’Orsay, the Academy Francaise, the French National Assembly the Alexander III bridge and other notable buildings. The night cruise should be on everyone’s bucket list. We went under the Pont Neuf, the oldest bridge in Paris and the Pont Marie, where lovers make a wish and share a kiss. We did both!

The Louis Vuitton Fondation had an exposition of Jean-Michel Basquiat and Egon Schiele’s paintings. We had already seen several exhibits of Schiele in Vienna which we greatly enjoyed.

The Vuitton had an extensive collection of his drawings as well as paintings. Basquiat was enlightening with his disturbing, bold depictions of Black America during the 1980s. The insecurity and aggression Blacks felt about police brutality and cultural isolation were evident throughout his paintings. Basquiat started as a graffiti street artist in New York City and was a contemporary of Andy Warhol’s.

The 2014 Vuitton Fondation built by Frank Gehry is still a soaring example of one of his more recent architectural wonders. It resembles a ship with billowing, massive, curved glass windows simulating sails.

We had dinner with our cousins at Les Flottes on Rue Cambon. 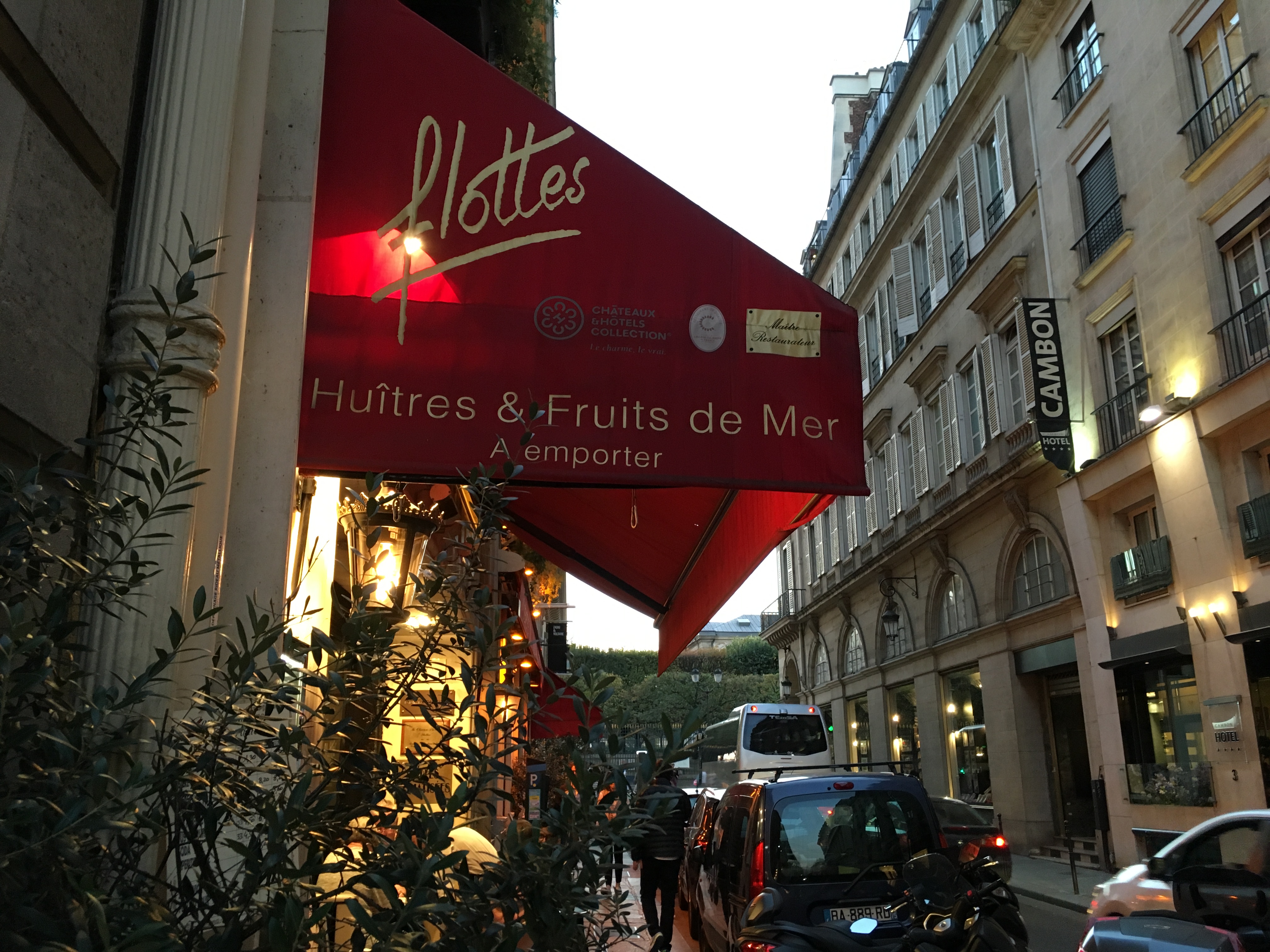 It used to be one of our favorites but seems to have gone decidedly downhill with a change of ownership. I had a nice frisee salad with lardons and sea bass with mashed potatoes. Claude had calves liver. We shared a French toast with caramel sauce and vanilla ice cream for dessert. Although the meal wasn’t the finest, the company was. It was family night!

Our last foray into the art world was the Musee Jacquemart-Andre, a 19th century Second Empire mansion where we saw a magnificent exhibit of paintings by the Italian painter Caravaggio who lived in the 16th century.

The mansion was once owned by Edouard Andre and his wife Nelie Jacquemart who were art collectors. They furnished their mansion with extraordinary art, furniture and tapestries. The exquisite interior marble staircase, ornately furnished rooms and garden are well worth a trip to the museum.  Our 12 days in Paris definitely ended on a high note.