We packed our suitcases and went to our last breakfast at Cafe Mozart and took another stroll around Salzburg to the Domplatz at noon to hear the 35 bells toll in the Carillon Tower. Unfortunately we waited in vain since they never tolled. I found out later that we had missed the 11:00 am tolling. The bells were purchased in Antwerp by Archbishop Thun in the 1700s and assembled in Salzburg by a resident clockmaker.

We went to the train station at 1:00 for our 2:10 train to Vienna. A note about the train. Above many of the seats there was a lit “Reserved” sign. At first we thought we couldn’t sit there and tried to find seats without the signs but every seat in our carriage had them. As we came to understand, the seats “may” be reserved but it doesn’t mean they are reserved. In other words you take your chances sitting there and could get booted out of the seat if someone buys a reserved seat. The trip from Zurich to Salzburg was 5 hours and the trip to Vienna was 3 hours and no one ever came to claim the seats. It’s good to know how the system works for future reference and it’s probably safer to pay for reserved seats, particularly if you are traveling during a holiday period.

We called the owner of the apartment on Gonzagagasse to let her know we were at the train station in Vienna and would make our way to the apartment via the metro. It was a beautiful day and the crowds were manageable even though it was the 5:00 rush hour. We even made a transfer that was only one stop to get us closer to the apartment. We encountered no problems.

The owner met us at the front door of the building and showed us to the 2-person elevator which took us up to the 3rd floor apartment. She explained the general function of the appliances, circuit breaker box, washing machine, internet, etc. 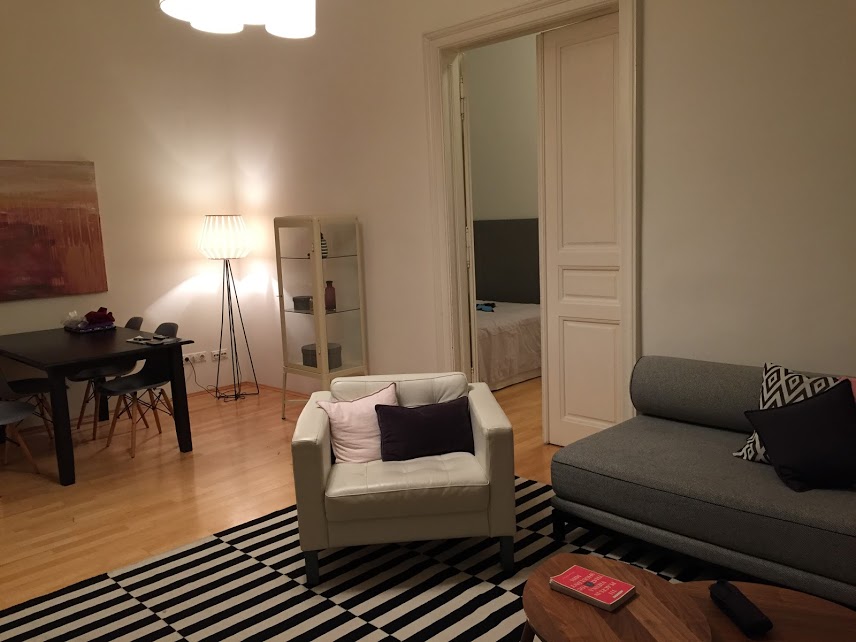 It had at least 12-14 foot ceilings and large windows decorated in a contemporary, minimalist style with a black and white area rug, a studio couch, comfortable chair, and a dining table for four. It was immaculately clean. The modern kitchen was small but adequate with a Nespresso machine, dishwasher, stove but no microwave. The bedroom was long, deep and narrow with a king size bed (no room for night tables), an expansive wall of closets and drawers, and a computer table across from the closets. The marble bathroom was large by European standards and had a good size shower with a curved, glass door, a step up to the toilet with a tall, narrow shelved closet, a sink and the washer/dryer unit. There was plenty of room for all our personal items. The towels were thick and fluffy.

We found a large collapsible drying rack in the closet which we used since the drying cycle on the dryer was 3 hours long and could not be reduced in time! European washers and dryers are a far cry from American appliances and detailed operating instructions are a must.

Vienna was voted the #1 most livable city in the world. It was clean, had environmentally friendly bike paths winding throughout the city, good social services, excellent public transportation system and was visibly prosperous. They have the youngest prime minister in the EU at 32 years old and the oldest president at 78.

The buildings were elegant, decorative and distinctive like Paris. The main pedestrian ways in District 1, the old city were wide and easy to navigate around the throngs of tourists.

Vienna has its coffee culture dating back centuries and coffee houses were numerous with locals lingering over a cup of coffee, newspaper or iPhone without interruption. When entering a cafe customers seated themselves unlike restaurants where you are met by a hostess. Eventually, an Herr Ober traditionally dressed in black with a bowtie approached to provide a menu. We were told that the Herr Ober was responsible for keeping an eye out for new customers who walked through the door. The classic coffee houses had the most interesting interior furnishings and the most extensive pastry displays. We went to Schwarzenberger Cafe established in 1818 lined with leather chairs and crystal chandeliers. I doubt it had changed much from the 1800s. There was a long list of Viennese coffees and pastries to indulge in as well as a lunch/dinner menu. The coffee houses are an institution in Vienna.

I would recommend the Lola Spanish tapas restaurant at 14 Gonzagagasse as a good dinner choice if you find yourself nearby. Coincidentally it was located adjacent to our building. It was a small, popular restaurant that was full to capacity every night. Reservations are recommended. We ate there twice. The owner was especially friendly and hospitable and waved when he saw us walking past his window. The food was fresh and portions were perfect for sharing. Everything we had was delicious. I particularly liked the fried anchovies, garlic shrimp, Spanish omelette and crème brulee. We also ate at Elissar, an elegantly decorated Lebanese restaurant on a side street near the Grand Hotel. It had good food, especially the chicken dishes and curried lentil soup.

We had tickets to the Muth Theater for a Vienna Boys Choir concert. It is their official home. I made reservations online. From my research I determined that going to the Muth Theater was preferable to going to the Imperial Hofburg Chapel during a Sunday Mass. At the Mass they sing for a limited time but you never see them in the loft in their charming sailor boy outfits. The performance was two hours long and had a live orchestra. The enthusiastic conductor reminded me of an animated Leonard Bernstein swinging his hair and body to the music. I was afraid he might fall off the podium. It was a lively performance and I was very glad we had gotten tickets in advance since it was a full house. It was a twenty minute walk from the apartment.

We decided to go to a Sunday concert at the Kursalon Wien in Stadt Park. The program was Strauss and Mozart with two opera singers and two ballet dancers. It was well done and the performance was sold out. Here’s another tip . . . everyone was required to check their coats. We decided to hurry down the three flights of stairs at the end of the concert to beat the mob scene with everyone waiting in line for their coats. It was a sound decision and we were the first ones to exit the building.

My best recommendation for sightseeing would definitely be the Big Bus tours. We bought a 48 hour pass and took three tours of Vienna, a guided walk and a night tour all for the price of 30 Euros per person. One of the routes was to Schonbrunn Palace and the Upper Belvedere Palace. Another tip: Don’t buy the more expensive tour at the Schonbrunn which included the labyrinth and 40 palace rooms. The least expensive package included the gardens minus the labyrinth and 22 rooms which was more than adequate since the palace interior was over crowded with tourists.

The Upper Belvedere Museum was much more manageable except for Gustav Klimt’s “The Kiss.” Every tourist thought it was necessary to pose for selfies in front of the painting. It was exasperating! The gardens at both palaces were not nearly as beautiful or manicured as French gardens at the Tuileries or Luxembourg Garden in Paris. 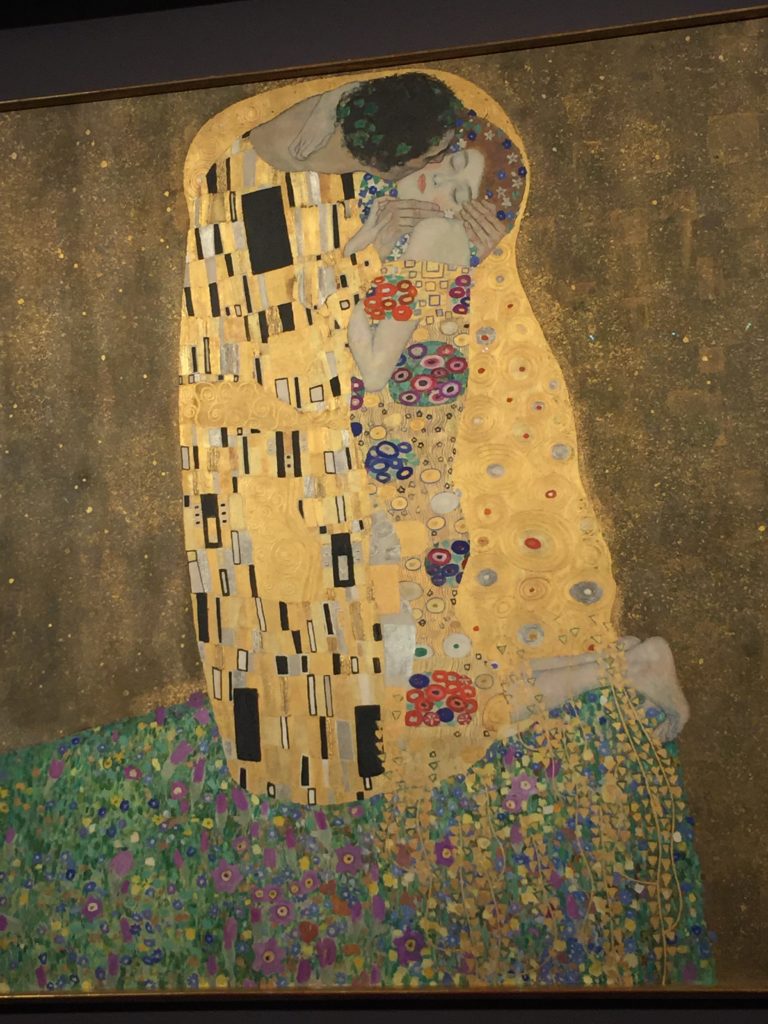 One of the most enjoyable museums we visited was the Leopold to admire their collections of Gustav Klimt and Egon Schiele’s paintings.

Another interesting museum was the Sisi Museum where we learned about Empress Elizabeth (Sisi) and Emperor Franz Joseph I. We visited royal apartments and saw the sumptuous gold, silver and porcelain dinner settings and artifacts that were used for state dinners. The incredible bounty of riches the Habsburg Empire accumulated while they reigned may explain why the dynasty came to an end in bankruptcy in 1918. The Sisi Museum gave us a better understanding of the royal Habsburg family and Sisi in particular who was an independent spirit and rejected much of the royal protocol and pageantry. 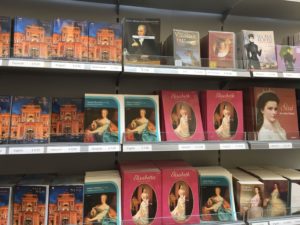 We also spent an entire day of poignant reflection at the Jewish museums at Judenplatz. Austria has a dark history when it comes to the Jews dating back to the Middle Ages. In 1420-21 the Jews were banished from Vienna, forced to convert to Christianity or burned alive at the stake. Up to 300 Jews committed a collective suicide to avoid forced baptism. The original synagogue that stood on Judenplatz was demolished. On the third floor of the museum there was a shocking walking stick collection from the 18th century with handles depicting the age old stereotypical caricature of long Jewish noses, beady eyes and beards rife with Antisemitic sentiment. 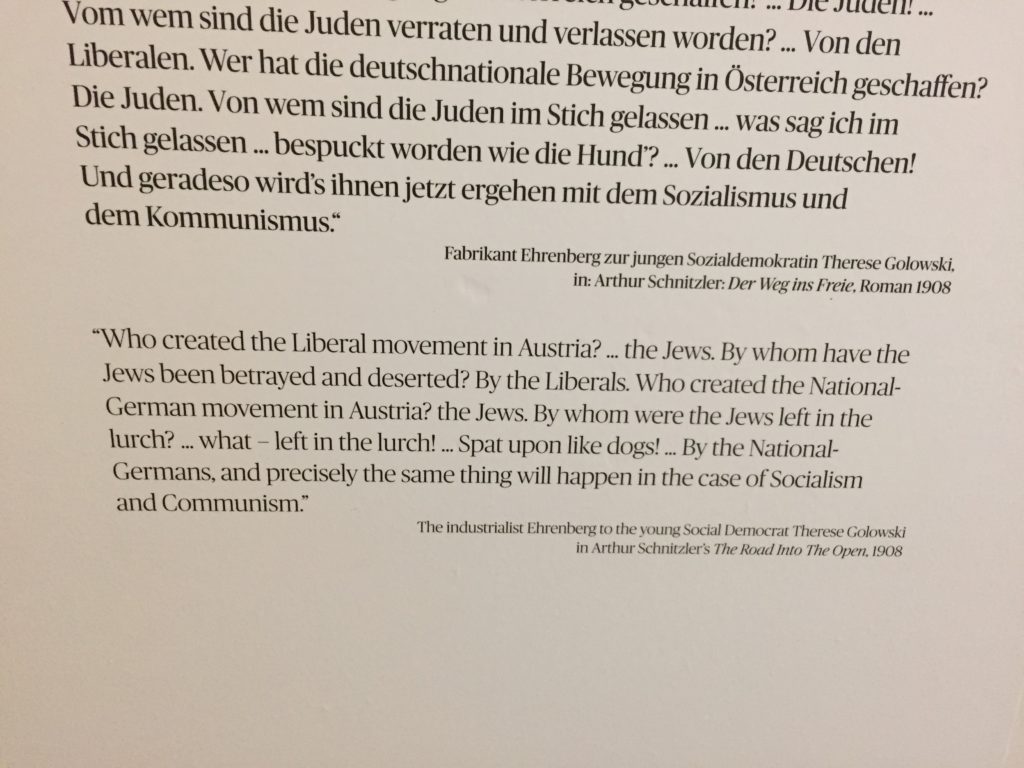 Over the centuries the Jews were driven out of Vienna yet repeatedly returned after banishment. By the mid 1800s they were prospering and many had become respected members of the arts and literary circles as well as financial pillars of the community.

During the late 1800s and early 1900s the Vienna Salon movement was in vogue hosted by the wealthy Jewish families of Berta Zuckerkandl, Sophie von Todesco and others. They provided intimate venues for promoting artists like Gustav Klimt, Oskar Kokoschka and Otto Wagner the architect while creating an atmosphere where politics and issues of the time could be freely discussed. Among the renowned guests were Johann Strauss and Gustav Mahler. This creative, inclusive patronage to Modern Art came to an end with the annexation of Austria by Germany in 1938.

In November 1938 the devastating pogrom known as Kristallnacht (The Night of Broken Glass) occurred. The Nazis destroyed more than 80 synagogues, Jewish businesses and murdered Jews in the streets with abandon. During the Nazi regime 65,000 Austrian Jews were exterminated. Jewish population in Vienna never recovered.

In 1995 an excavation of Judenplatz miraculously uncovered the walls of the original Medieval temple. It has since become part of the permanent exhibit in the museum. An  unadorned tunnel in the basement leads to the dramatically darkened, elevated room. The remnants of the walls are illuminated in light. It is a moving experience to stand in the presence of the original walls of the synagogue with the full knowledge of what transpired there.

After years of controversy, a Holocaust memorial by the British sculptress Rachel Whiteread was unveiled in 2000. It commemorates the 65,000 Austrian Jews who perished in concentration camps. It has become known as the “Nameless Library.” We walked by it several times without realizing it was a memorial. The sculpture is a concrete box resembling a bunker with shelves of books facing inward; the doors sealed.  It is a symbolic reference to all the souls whose stories will never be heard. . . the books that will never be read. It is starkly austere and occupies a space on sacred ground in the middle of Judenplatz. It is not a pretty structure but it makes a strong, silent statement.